The “Be ACTive” project has as its main objective to provide quality training for young people from small settlements in the Blagoevgrad district to help them develop their entrepreneurial skills, applying for work and promoting their own initiative. During the project will be realized 5 / five / trainings, 2 / two / information days and 1 / one / campaign. The trainings will be two-day and will cover different thematic modules that will enable young people to be active in small settlements, and we will also help them find a way to tackle different youth issues. Through the information days we will raise the knowledge of young people and give them guidance and opportunities to participate in the process of solving important social issues. The “Take an initiative” campaign will be aimed at encouraging young people to express ideas for change on pressing issues related to their region. All activities will be carried out by a highly qualified team of specialists who will work together with the project manager for quality performance During the project, over 500 young people between the ages of 15 and 29 will be covered by the small settlements in Blagoevgrad region without any difference in their social, property, political, ethnic or religious differences. .ch. young people with disabilities. The target group of the project is all young people aged 15-29, with no differences in their social, property, political, ethnic or religious differences. Identification of young people who are neither in employment nor in education and training according to the National Youth Guarantee National Implementation Plan. The project is aimed at young people from small settlements and will also include young people in unequal position. Anyone who does not have the same opportunities with peers because of one or more of the circumstances or situations listed below is considered to be such. In some cases, these circumstances or situations do not allow young people to have real access to formal and informal education and active participation in society as a whole. Social difficulties: young people who are discriminated against by gender, ethnicity, religion, sexual orientation , disabilities, etc .; young people with limited social skills or with anti-social or sexual-risky behavior; young people in a problematic situation; (formerly) criminally developed, young people who are (or have been) addicted to drug or alcohol use The main goal of the project is to raise young people in small settlements and improve their awareness and participation in the process of solving important social issues and changes affecting young people. The objectives of the project are: Raising the awareness, knowledge and experience of young people about the opportunities to participate in organizing their own lives themselves, to increase their motivation for their own developed e. Activities: Organizing and conducting trainingsThe planned trainings will be conducted in the form of 5 training seminars in different settlements from Blagoevgrad region – Bansko, Hadjidimovo, Razlog, Garmen and Satovcha. The tutorials will be developed by a specialized team and will be conducted according to a prepared from them a schedule and popularized through social networks and media. The selected topic will be divided into different panels and subtopics that will be tailored to the objectives of the Program and the project. The training will be based on interactive methods and techniques as a basis for non-formal education. The trainings will be led by our experts – a psychologist and a lawyer. Given the settlements in which we will train, it is important that young people from these settlements work with professionals with proven experience that can help young people overcome their cultural, religious and ethnic differences. Through the psychologist, young people will have the opportunity to get out of the status quo they live in and realize the huge potential they have. This will help them become more active and interested in building their own personalities and shaping their views on their future. In this way, they will understand that the young people from the small settlements have the opportunities of their peers from the big city. 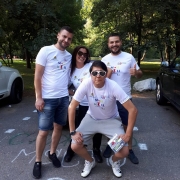 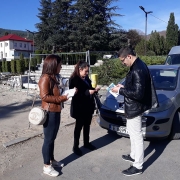 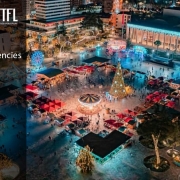 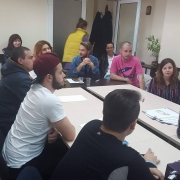 Training "The ability to talk to others"

First pressconference under project “Be ACTive”
Scroll to top

We may request cookies to be set on your device. We use cookies to let us know when you visit our websites, how you interact with us, to enrich your user experience, and to customize your relationship with our website.

Click on the different category headings to find out more. You can also change some of your preferences. Note that blocking some types of cookies may impact your experience on our websites and the services we are able to offer.

These cookies are strictly necessary to provide you with services available through our website and to use some of its features.

Because these cookies are strictly necessary to deliver the website, refuseing them will have impact how our site functions. You always can block or delete cookies by changing your browser settings and force blocking all cookies on this website. But this will always prompt you to accept/refuse cookies when revisiting our site.

We fully respect if you want to refuse cookies but to avoid asking you again and again kindly allow us to store a cookie for that. You are free to opt out any time or opt in for other cookies to get a better experience. If you refuse cookies we will remove all set cookies in our domain.

We provide you with a list of stored cookies on your computer in our domain so you can check what we stored. Due to security reasons we are not able to show or modify cookies from other domains. You can check these in your browser security settings.

These cookies collect information that is used either in aggregate form to help us understand how our website is being used or how effective our marketing campaigns are, or to help us customize our website and application for you in order to enhance your experience.

If you do not want that we track your visit to our site you can disable tracking in your browser here:

We also use different external services like Google Webfonts, Google Maps, and external Video providers. Since these providers may collect personal data like your IP address we allow you to block them here. Please be aware that this might heavily reduce the functionality and appearance of our site. Changes will take effect once you reload the page.

The following cookies are also needed - You can choose if you want to allow them: